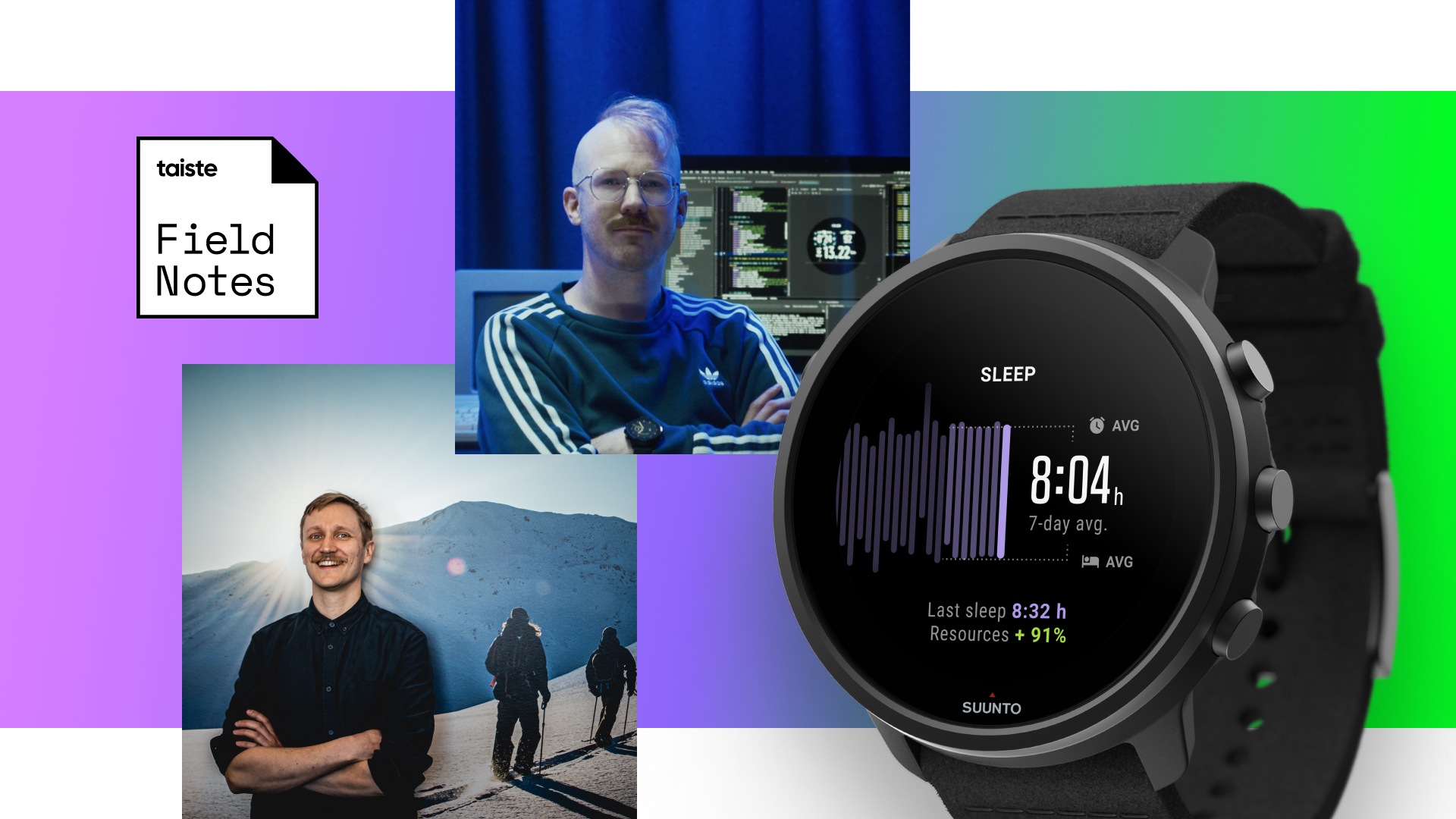 Taiste Field Notes is a new article series where we take a peek at the everyday lives of the people working on digital product development. In the first chapter, we sit down with the members of the Suunto team. Having just released a major update for Suunto 7 smartwatch, designers Valtteri and Timo reflect on the long co-operation between us and what they've learned along the way.

‍Suunto is a company even us usually modest Finns should be proud of. They are one of the most respected sports watch and precision instrument brands out there. Their flagship model Suunto 7 came out in 2020, combining sport and lifestyle features in a brand new way. We at Taiste have worked with them since 2013, and played a major part in Suunto 7's UX design – as well as the big new update that was just released at the time of this interview. The update includes major new features such as comprehensive sleep analysis, body resources management, and immediate heart rate feedback visibility. The watch has a new physical design, too: the new edition now comes with a new sleek titanium bezel and turn-by-turn navigation.

We invited Suunto's Concepting & Experience Lead Timo Halko and Taiste's Senior UX Designer Valtteri Mäki to chat about the past, present, and future of the project.

‍Welcome, Timo and Valtteri! What's on your mind today?

‍Timo: I'm good, thanks. Even though this is a remote meeting, it feels like a nice throwback to pre-corona times when me and Valtteri were actually sitting in the same room several times a week. Not that the work itself hasn't been smooth: I think the fact that this transition to remote work has been so seamless is a testament to how well the co-operation between Suunto and Taiste works.

‍Valtteri: I fully agree. Having worked both remotely, onsite, and on the go since the start of the project, I guess you could say we've been training for this.

‍A massive update has just been released for Suunto 7. Its biggest new feature is the much-awaited sleep tracking. Can you tell me how you approached its design?

‍Timo: The lack of sleep tracking was something we constantly received feedback from the users. This feedback was our biggest driver. We started by researching what the customers really wanted in more detail.‍

Valtteri: I was fascinated by the universal aspect of sleep tracking. Whereas many other Suunto features are aimed at people who regularly engage in all kinds of sports, monitoring sleep is something that's potentially interesting to just about everyone.

‍Timo: Finland happens to have some of the world's leading sleep researchers. We also consulted them because we wanted the benefits to be scientifically sound, too.

‍What was the result?

‍Timo: For someone who wants to improve their performance, good and restorative sleep is crucial. Both the amount of sleep and maintaining a regular sleep pattern are important. We all have the occasional sleepless nights and you don't really need a watch to tell you when it happens. What we wanted to do was to offer a wider perspective: do your sleep habits help you recover? Is your sleep pattern consistent enough?

Working with Taiste, we've constantly tried to break the unnecessary barriers between agencies and ourselves, and worked as one team. I really enjoy doing it this way.

That sounds really exciting. Tell me, how do you feel about the co-operation between Taiste and Suunto in general? We've been working together for a while now, after all.

‍Valtteri: This has been one of the most holistic projects I've ever worked on. I've learned so much along the way, and it feels like we complement each others' strengths with Timo, and with the whole Suunto team.‍

Timo: I'm constantly humbled to get to work with experts like Valtteri. Working with Taiste, we've constantly tried to break the unnecessary barriers between agencies and ourselves, and worked as one team. I really enjoy doing it this way.

‍Thank you for the interview and congratulations for the release of the big update! Any closing remarks? Some anecdote from the past perhaps?

‍Timo: Ah yes, this is one of my most fun memories of Suunto 7. The initial plan for the watch had already been established, but together with the design team, we locked ourselves to Amer Headquarters for a long day of brainstorming and came out with a completely revamped concept, tingling with excitement while asking ourselves: "how are going to present this?" It was awesome.

‍Read more about Suunto 7 and its new features here.